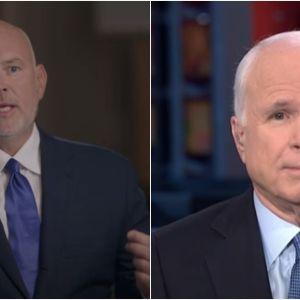 'Betrayed!' Top Aide to John McCain Unloads on Former Boss, Then Picks off Lincoln Project Phonies One by One

Republican political strategist Steve Schmidt went on an extended tear via social media, podcasts, and the media to shred everyone who has left the Lincoln Project, the late Senator John McCain, his daughter Meghan McCain, and former Alaska Governor Sarah Palin.

Schmidt was the architect of the late Sen. John McCain’s 2008 presidential campaign and he is now very publicly declaring that he regrets it and is disillusioned because of it. He specifically regrets helping Palin take center stage as McCain’s running mate. He evidently blames her for Trump rising to power.

The senator was allegedly Schmidt’s hero. But by the end of the campaign, he asserts that he didn’t think McCain should be in the White House.

“The only conceivable conclusion that you could get to after watching his conduct in this campaign was that he’s completely unfit to be president,” Schmidt told Politico in an interview. “Truth is, I didn’t vote for him either.”