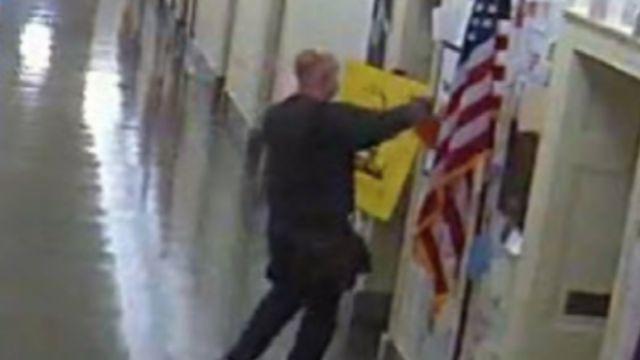 The Department of Justice (DOJ) will reportedly not pursue prosecution of a top Democrat staffer who allegedly vandalized posters in the Capitol complex outside Rep. Marjorie Taylor Greene‘s (R-GA) office.

Just the News reported Monday that Timothy Duane Hysom, chief of staff for Rep. Jake Auchincloss (D-MA), was referred for criminal charges by Capitol Police, but the U.S. Attorney’s office declined to approve an arrest warrant.

“Capitol Police asked federal prosecutors back in March for an arrest warrant for Timothy Hysom, 51, a longtime Democrat congressional staffer who worked for Rep. Adam Schiff before rising to be Auchincloss’s top aide, after capturing Hysom on hidden camera security footage defacing Greene’s posters with stickers with religious messages, according to copy of the arrest warrant obtained by Just the News,” the outlet reported.

“Police said they believed Hysom may have been involved in seven defacing of posters outside Greene’s office in the Longworth Congressional Office Building between January and March and that he declined to be interviewed when confronted,” Just the News reported. Hysom was offered a “non-custodial interview and he declined and retained counsel,” according to a copy of the arrest warrant.

“Based on the aforementioned, it is your affiant’s belief that the defendant, Timothy Duane Hysom … did violate DC Code § 22–3312.01 Defacing Public or Private Property,” read the arrest warrant, which can be accessed here.

Just the News noted that this was “the same U.S. Attorney’s office that pursued the Jan. 6 defendants.”