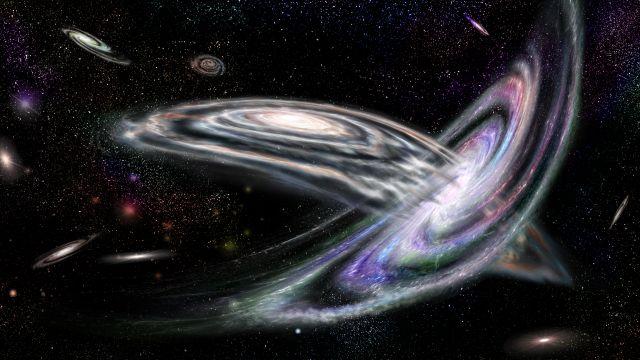 Astronomers this week announced the landmark discovery of a massively distant laser signature they said was evidence of the collision of two separate galaxies into one.

Scientists at the University of the Western Cape in Capetown, South Africa said in a press release that they had observed “a powerful megamaser – a radio-wavelength laser indicative of colliding galaxies.”

“This is the most distant such megamaser found so far,” the release said.

“When galaxies merge in collisions of cosmic proportions, the gas they contain becomes extremely dense,” the astronomers explained. “In particular, this can stimulate hydroxyl molecules, made of one atom of oxygen and one atom of hydrogen, to emit a specific radio signal called a maser (a maser is like a laser but emits radio waves instead of visible light).”

“When that signal is exceedingly bright, it is called a megamaser,” they added.