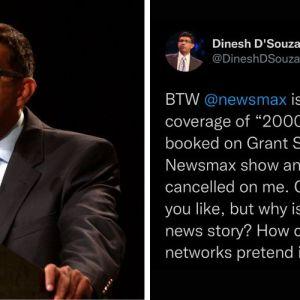 On Monday, conservative filmmaker and podcaster Dinesh D’Souza took aim at cable news channel Newsmax for allegedly blocking coverage of his new film “2000 Mules.” The film highlights concerns over the use of “ballot harvesting” during the 2020 presidential election, which saw a massive increase in early and absentee voting.

“BTW @newsmax is also blocking coverage of ‘2000 Mules.’ I was booked on Grant Stinchfield’s Newsmax show and then the network cancelled on me. Criticize the move if you like, but why isn’t this a legitimate news story? How can so-called news networks pretend it doesn’t exist?” D’Douza asked on Twitter.

Responding directly to D’Souza, Newsmax noted that the outlet has covered the documentary, including airing its trailer “dozens of times,” airing comments made by President Donald Trump regarding it, and featuring it in an episode of their daily podcast.

Nearly 12 hours after D’Souza posted his tweet, Newsmax reposted an April 30 interview with D’Souza on the Newsmax Daily Rob Carson Show, in which they discuss the then-soon to be released film. The film alleges that “mules” dropped off large numbers of ballots at drop boxes, wearing gloves and stopping at numerous ballot boxes.