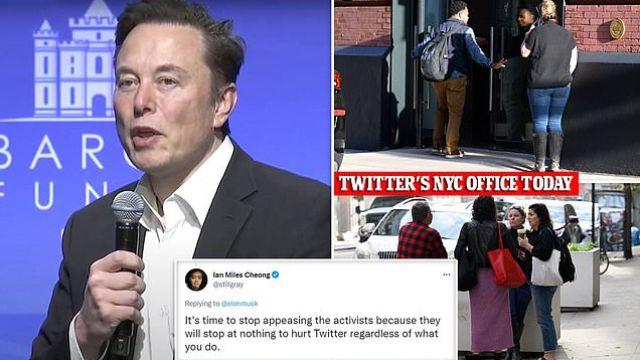 Elon Musk has been urged to press ahead with his controversial reforms to Twitter, hours after he fired half of the staff.

The social media platform informed 3,700 workers that they were being let go, and would be paid out until the end of January or February to avoid falling foul of California’s employment notice laws.

Musk insisted that the moves were necessary to make the company profitable, and on Friday morning tweeted: ‘Twitter has had a massive drop in revenue, due to activist groups pressuring advertisers, even though nothing has changed with content moderation and we did everything we could to appease the activists.

Malaysian gamer and journalist Ian Miles Cheong replied: ‘It’s time to stop appeasing the activists because they will stop at nothing to hurt Twitter regardless of what you do.’

Earlier on Friday, Musk joked it would be ‘deeply ironic’ if someone on Twitter ‘takes him out’ as he said it could be ‘one of the most valuable companies in the world’.