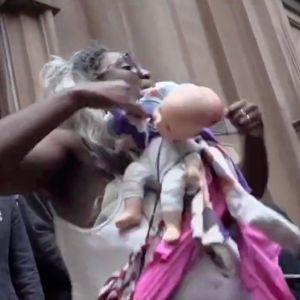 Reasoned arguments and constructive discourse are means utilized by parties with opposing views who seek to find compromise or understanding. So, when witnessing the depraved scenes taking place outside houses of worship like St. Patrick’s Old Cathedral in NYC Saturday, it’s easy to recognize that their position on abortion and “killing the babies” is one of absolutism.

The fervor on the left has grown more frenzied throughout the week following the leak of Justice Samuel Alito’s majority draft opinion on the case Dobbs v. Women’s Health Organization. With expectations holding that the draft will be affirmed as the final ruling, thus overturning Roe v. Wade and returning authority to legislate abortion to the states, activists have moved beyond harassing the court and legislators to attacks against churches and religious figures.

Crackhead Barney is described a performer and, while wearing a one-piece bathing suit in lower Manhattan Saturday, she put on quite the show outside the historic NYC church.

With shouts of, “I’m killing my babies,” and “God killed his kid, why can’t I kill mine?” the performer repeatedly removed dolls from her swimsuit in mock abortions outside the church where Catholics had gathered for a 14-year-old tradition where they themselves were readying to conduct a protest in front of a Planned Parenthood on the next block. As National Review reported, the Mass and Rosary procession has been conducted on the first Saturday of every month with few exceptions.