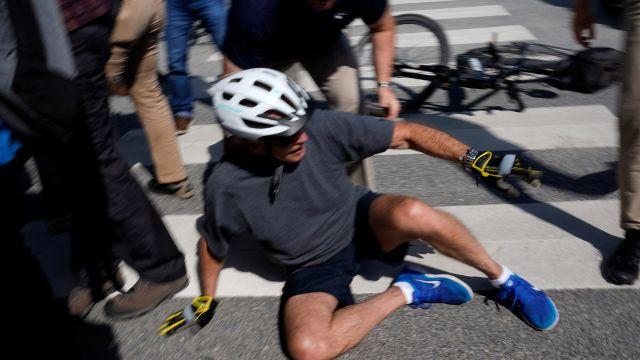 President Biden fell off his bike as he took a ride near his Rehoboth Beach, Del. vacation home Saturday.

Secret Service agents swarmed the 79-year-old commander in chief and helped him get upright.

“I’m good, I’m good,” Biden said, telling pool reporters that he tumbled when one of his shoes got stuck in a toe cage on a pedal as he tried to stop and chat with well-wishers.

Biden set off around 8:30 am, surrounded by security agents, and tooled around the bike paths of Cape Henlopen State Park.

An hour later, he pulled away from his wife Jill – who continued on along the path – and cruised over to a group of about 30 curious locals who had gathered near the press pool to watch him pass by.

“Happy Father’s Day,” a woman said, as others clapped.

But the crowd’s greetings turned to gasps as the president keeled over to his right, falling on his elbow and his knee.