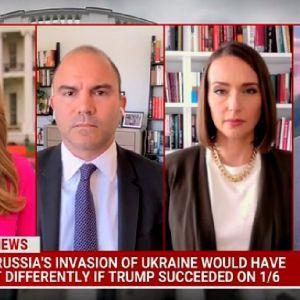 MSNBC host Nicolle Wallace is disingenuously claiming that the January 6 protest made it easier for Russian President Vladimir Putin to invade Ukraine despite the fact that the dictator besieged the satellite country under the Obama and Biden administrations, but not under former President Donald Trump’s.

Wallace made her argument during a segment on Monday where she referred to remarks by former National Security Council adviser Fiona Hill who contends that Putin would have been emboldened to invade Ukraine if Trump had succeeded in maintaining power after the Jan. 6 protest took place. Hill asserted that Putin would have viewed the US as “no different from any other country in the world that just had a coup.”

The MSNBC talking head then alluded to the opinions of “some experts” who think that the political rift exposed that day “solidified Vladimir Putin’s ambitions to go to war in Ukraine, because even though Trump had not succeeded, Putin saw a window of opportunity in January 6 to strike while America wrestled with its own deep conflicts.”

MSNBC legal analyst Daniel Goldman was in full agreement with Hill, calling Jan. 6 a “triggering moment” that “opened the door” for Putin to invade Ukraine because of perceived instability within the US.