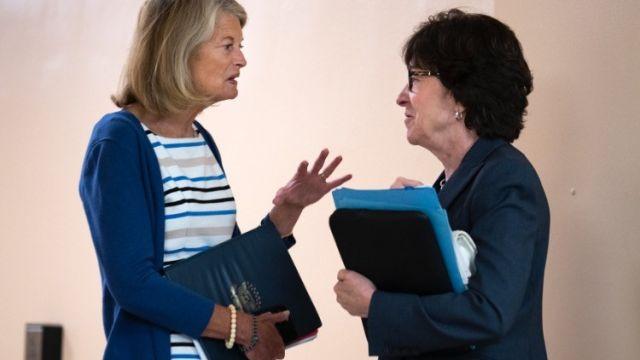 Two liberal Republican senators joined two ultraliberal Democrats in introducing legislation that would make abortion-on-demand once more the law of the land.

Senators Lisa Murkowski (R-Alaska) and Susan Collins (R-Maine), along with Senators Tim Kaine (D-Va.) and Kyrsten Sinema (D-Ariz.), on Monday introduced the Reproductive Freedom for All Act, which would codify Roe v. Wade and other Supreme Court decisions that were either overturned or, in these senators’ view, imperiled by the court’s recent ruling in Dobbs v. Jackson Women’s Health Organization.

“After the Supreme Court gutted a woman’s right to make personal health care decisions, Congress must restore that right,” Kaine said in a statement. “That’s why I’ve worked with my colleagues to find common ground on this bipartisan compromise that would do just that. The Reproductive Freedom for All Act would restore the right to abortion and protect access to contraception by enshrining those freedoms into federal legislation.”

The bill would prohibit states from restricting access to contraceptives and from imposing an “undue burden” on a woman’s ability to abort her pre-viability baby. While it allows states to “regulate the termination of a pregnancy after fetal viability,” it does not permit them to prevent an abortion that “is medically indicated to protect the life or health of the pregnant woman.”