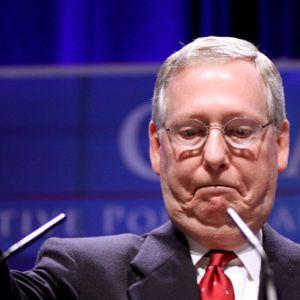 Out of Touch: McConnell Says ‘All’ Senators Believe Ukraine War Is Top Priority

Sen. Mitch McConnell (R-KY) is claiming that “we all agree the most important thing going on in the world right now is the war in Ukraine.

He made the comments after meeting with President-imposed Joe Biden in which the globalists plotted the best way to send billions and billions more to Ukraine to keep their proxy war with Russia going even if it means risking World War 3.

“I think we all agree the most important thing going on in the world right now is the war in Ukraine,” McConnell said to reporters.

“I had a chance to call the president last week and request that the Ukraine package move by itself and quickly. He said, let me think it over. He called back in about 15 minutes and agreed that we need to do this for Ukraine only, and quickly,” he continued.

“I think we’re on a path to getting that done, discussions are underway between the House and Senate appropriators on the crafting of the package,” McConnell added. “It needs to be clean of extraneous matters, directly related to helping Ukrainians win the war.”