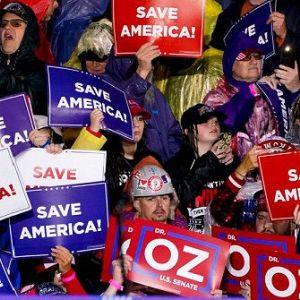 A recent poll in the Pennsylvania Republican primary for U.S. Senate puts Dr. Mehmet Oz narrowly in the lead for what now looks like a three-way race among the top contenders.

Conducted between May 5 – 8 with a 2.99 percent margin of error, the survey questioned 1,080 likely Republican voters. A full 15 percent remain undecided, and should more candidates drop from the race, the numbers for any of the top contenders would likely go up.

Mostly due to his celebrity and the endorsement from former President Donald Trump, Dr. Mehmet Oz has continuously held the top slot, though his grip has been slipping in recent weeks as conservatives question his fealty to issues like abortion and gender indoctrination, not to mention his dual-citizenship with Turkey. As Breitbart News profiled over the weekend, the celebrity doctor was met with more than a fair share of boos during an appearance at a Trump rally over the weekend.

Meanwhile, Kathy Barnette’s star power has been steadily rising with conservatives and the MAGA Trump base, especially after releasing her powerful video in which she decried abortion by citing her own beginnings as a child conceived in rape when her mother was just age 11.