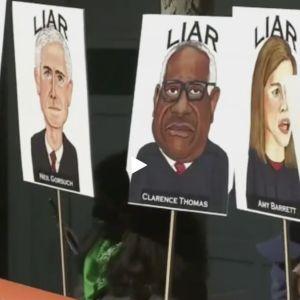 This is apparently why a small group of pro-choice picketers showed up in front of House Speaker Pelosi’s home in San Francisco, carrying elaborate placards with the faces of the five offending Supreme Court justices who are likely to be responsible for the reversal of Roe v. Wade. Armed with bullhorns and an inordinate amount of anger, they condemned Pelosi and all other Democrats as being a party to the abortion law’s demise.

“We are here because the Democratic Party and the Democrats as a whole have been complicit in this whole thing,” shouted one unnamed female protester, according to Fox News. The group gathered behind a large banner that read “Abortion on demand and without apology!” Above the illustrations of the five conservative Supreme Court justices was written the word “LIAR.”

“We are here because this draft decision is what it is, it’s only a draft, and we will protest here, in front of the leadership of the Democratic Party, and in the streets from coast to coast, unceasingly, because we work to keep abortion legal—legal and accessible, not rare,” the protester explained, outlining her plan to ratchet up the pressure on Democratic politicians to ensure the continued nationwide legality of abortion.