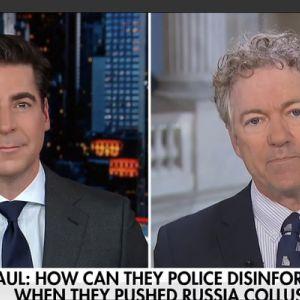 From NewsBusters — posted 2 weeks ago

Sen. Rand Paul (R-KY) slammed the new Disinformation Governance Board on Fox News. “[W]e arrive at the truth through disputation,” Paul said during the interview. “Anybody who says we can do it by edict is somebody completely unaware of the idea and the concept of freedom of speech.”

When Waters asked what Paul planned to do about the DGB the senator responded bluntly. “We’re going to shut it down,” he said. Paul noted that he is collecting signatures from other senators for this purpose, and hopes to get a vote about defunding the board. “So much for the marketplace of ideas,” Paul said. “They have decided that they’re going to determine what disinformation is.”

Paul pointed out that the federal government spent millions on an investigation that falsely accused former President Donald Trump of colluding with Russia. If they can’t admit that that’s disinformation – it was propagated by CNN for years and years … how could they possibly do the job of policing disinformation?”

In fact, Paul said, he does not support anyone policing information. “Even if you could [do it], and they admitted that it was disinformation, I’d be against policing CNN. People can turn the channel.” The senator said the public can filter its own information.