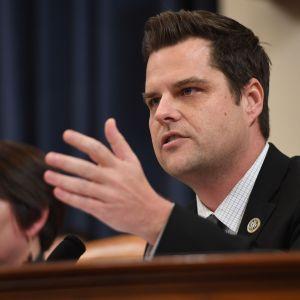 Rep. Gaetz: 'We Are Sleepwalking into a War' - 'Regime Change in Russia' Is the Goal

(CNS News) — House Rep. Matt Gaetz (R-Fla.) criticized lawmakers who voted on Wednesday to send $40 billion in military and humanitarian aid to Ukraine, explaining that they are engaging in a proxy war to bring about regime change in Russia, and are unwilling to hold a vote on authorizing the use of military force. “We are sleepwalking into a war, and the American people are left in the dark,” said Gaetz.

Speaking on the House floor on May 11, Gaetz said, “Just a year ago, we lost a war against goat herders waving rifles [in Afghanistan]. Now we’re rushing to fight a nation that has 6,000 nuclear warheads. Representatives now recklessly assert that we are at war. Congressman [Seth] Moulton [D-Mass.] said last week, ‘We’re not just at war to support the Ukrainians, we’re fundamentally at war — although somewhat through a proxy — with Russia.’”

Just a year ago, we lost a war against goat herders waving rifles. Members of Congress are now recklessly asserting that we are at war with Russia.

If we are at war, then why not vote on an AUMF?

We are sleepwalking into a war, and the American people are left in the dark. pic.twitter.com/vN3xHT0JZ6