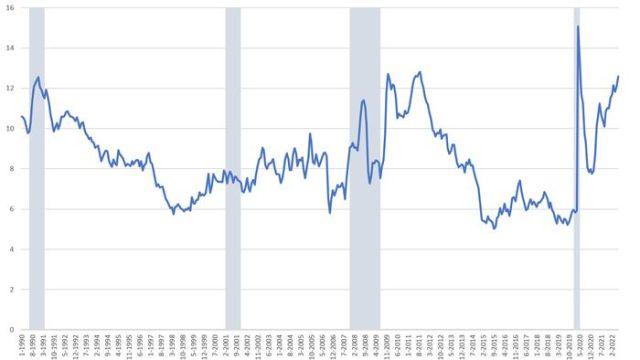 In spite of the fact that real wages are going down, the cost of living is soaring, and new jobless claims are heading up at a rapid pace, and the savings rate has collapsed, what really matters to the White House, it seems, is the “technical definition” of recession.

Never mind the fact that the US economy has contracted for the past two quarters, according to the federal government’s own numbers. Apparently, as long as the NBER has not yet issued its opinion on whether or not the US economy is in recession, the White House is going to double down on the assertion that the economy is in fine shape and people should really stop complaining. After all, as one White House spokesman put it, it’s not like there’s a famine or anything. So quiet down, rubes.

Although the White House seems to believe that things are pretty OK, the US’s misery index suggests they’re not.

June’s misery index (a composite of unemployment and CPI inflation) has risen to 12.5. That’s the highest since September 2011 when the US economy was experiencing a time of very weak job growth and economic growth following the Great Recession. At the time, the yield curve almost inverted, and there were fears of a new recession.