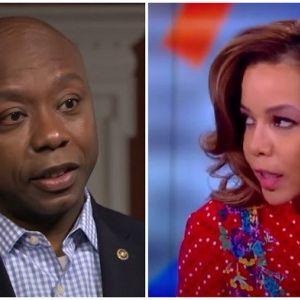 Republican Senator Tim Scott excoriated ‘The View’ co-host Sunny Hostin after she referred to Black Republicans as an “oxymoron.”

A segment on the show this past Friday went off the rails a bit as a conversation between Hostin, co-host Ana Navarro, and guest co-host Lindsey Granger grew heated.

Hostin asked Granger if she was a Republican, then interrupted with the comment, “I feel like it’s an oxymoron, a Black Republican.”

Having already delivered one ignorant comment, she expanded upon that idea by delivering another ignorant comment and roping Navarro, who has worked in Republican administrations but is now known for her Never Trump views, into the controversy.

One could write volumes on the topics Sunny Hostin doesn’t understand, but that’s neither here nor there.

Senator Tim Scott (R-SC) posted a clip of the video and responded on social media pointing out that he too has been called many racially derogatory names during his career, but it wasn’t going to stop him.

“Over the course of my time in politics, the far left has called me a ‘prop,’ a ‘token,’ the N-word, ‘Uncle Tim,’ and worse all because I am a Black Republican,” he tweeted.

Added Scott, “This type of divisive behavior is not what America is all about — and it will not stop me from speaking the truth.”