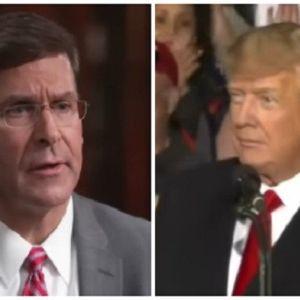 Trump Fires Back at 'Lightweight' Former Defense Secretary Mark Esper: 'I Had to Run the Military Myself'

Donald Trump absolutely unloaded on his former Secretary of Defense Mark Esper over claims made in an upcoming memoir, referring to Esper as a “lightweight” and “RINO.”

Trump answered a series of questions for comment from “60 Minutes” correspondent Norah O’Donnell regarding several claims made by Esper in his book.

As The Political Insider reported, Esper has claimed that the former President inquired on at least two occasions about secretly bombing illegal cartel drug labs in Mexico.

He reiterated that claim in his own “60 Minutes” interview.

“The president pulls me aside on at least a couple of occasions and suggests that maybe we have the U.S. military shoot missiles into Mexico,” he said.

Esper went on to reiterate other claims, including that Trump openly wondered about shooting protesters outside the White House and that he called Cabinet members – including then-Vice President Mike Pence – “f***ing losers.”

Responding to a request for comment from O’Donnell, Trump hammered Mark Esper, oftentimes referring to him by a derogatory nickname, “Yesper.”

Esper told O’Donnell that the former President calls him that with the “insinuation … that I was a ‘yes’ man.”