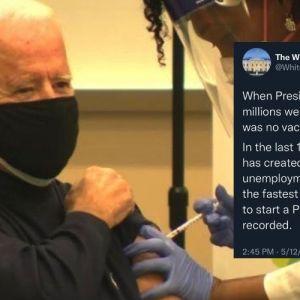 White House Lies Saying 'No Vaccine Available' when Biden Took Office - Even Though He Was Vaccinated Before Being Sworn In!

The White House issued a tweet on Thursday which falsely claimed that there was “no vaccine available” when President Joe Biden took office in January 2021.

In actuality, Biden received his first dose of the COVID-19 vaccine on live television on December 21, 2020, which was made possible due to former President Donald Trump’s “operation warp speed.”

“When President Biden took office, millions were unemployed and there was no vaccine available. In the last 15 months, the economy has created 8.3M jobs and the unemployment rate stands at 3.6% — the fastest decline in unemployment to start a President’s term ever recorded,” the White House said in a tweet on Thursday.

The White House attempted to credit Biden for the Trump administration’s accomplishments, but many were quick to point out the obvious lie, including the President’s supporters.